BUSHVET LINK TO MY BOOK WITH TONY PARK RELEASED SEPTEMBER 2013
http://www.internationalwildliferescue.org/book.html
Posted by Dr. Clay Wilson at 11:39 AM

POACH AS MANY ELEPHANTS AS YOU WANT, IF YOU GET CAUGHT WAIT 3 YEARS FOR COURT CASE TO COME UP THEN PAY $1000.00 AND WALK AWAY. THIS IS THE LAW IN BOTSWANA.

Unfortunately it goes deeper than this. If you’re concerned please read the rest of article.
Finally there is some news out of Botswana from where I was deported for interfering with the government slaughtering their own elephants for profit. I have been quiet for 2 years, waiting for the government leaders in Botswana to make mistakes of which they have made many. I can no longer hold back on attempting to expose this nest of corruption and deceit that has been slaughtering the Botswana elephant population for many years. My knowledge is that the situation is about to get thousands of times worse than it already is. These details will be released in short time.

For almost 5 years I was game warden and veterinarian for Chobe national park it was all volunteer work I funded mostly on my own... I witnessed this all first hand and have official reports to Botswana Parks Department to back up everything that I am about to share. I was deported without being given my day in court and to date no explanation has been given. I lost all material possessions and investments. All of my attempts to expose this have fallen on deaf ears. No one seems to give a damn and it’s beyond my comprehension.

Very few people seem to realize or understand that Chobe is home to almost half of the world’s African elephant population. The lives of these elephants are in the hands of corrupt unethical and unscrupulous politicians. These people have been slaughtering and will continue to slaughter these animals for profit. There is nowhere else in Africa to which one can go that have these numbers of elephants. The worst of this may be that the Botswana elephants have very small tusks compared to elephants in other areas due in part to genetics and in part to a deficiency of the mineral calcium. While elephant ivory harvest is a problem in all parts of Africa, due to their smaller tusk size, poachers must kill 4 to 5 more Botswana elephants than elephants from other areas of the continent to obtain the same amount of ivory.

All of the large organizations that I have contacted have simply ignored me as if I am crazy. Even the American embassy in Botswana did nothing for me. Even though the local people rely on tourism to survive will never stand up and tell the truth. They are fearful that if they do take a stand and speak out that they will be, as I was, deported or worse, killed. My survival in the jails of Botswana was most likely due to my US citizenship. One of the most difficult aspects of this issue is that the government of Botswana controls all media

One of the disturbing facts involved in this issue is that not a single elephant poacher has ever been arrested, let alone convicted, by the Botswana government. Why is that? Certainly the awareness campaigns have been going on for many, many years.

Ian Khama, the president of Botswana, has been placed on the board of conservation international. Most likely this is so that it can be said that they have an African president on the board which would make it more likely for the board to be able to procure more funds. To date nothing has been done to stop this serious problem except for just a show of power but no results have been forthcoming. Furthermore September 2012, Ian Khama put his brother TK Khama, a well-known and corrupt politician and not popular at all with his constituents, into the position of leader of the parks, wildlife, and tourism department. TK has, in my opinion, no qualifications or knowledge whatsoever regarding wildlife management and yet he holds the future wellbeing of these animal’s lives in his hands. It is a known fact that he is in collusion and dealing with the Chinese in the country. They were building roads and he was in charge of that project. If one has ever driven roads in Botswana it’s quite obvious that they were improperly constructed and money siphoned out of the deal went into someone’s pocket. I can only guess who.

It is fairly well accepted that as fact that major Chinese syndicates are controlling the elephant poaching in Africa. The China connection helps to explain how the poachers are so well equipped and informed regarding the what, where, and how of avoiding capture. The fact is that thousands of tusks are being discovered in various shipments out of Africa at various ports of exit. One wonders how many caches of illegal tusks are never discovered and make it to China and Vietnam. Last year alone nearly 15% of the entire population of wild African elephants was killed for their ivory. At this rate the prediction is that they will be extinct within 10 years.

I am but one man and I don’t have the political or financial power to fight these people on my own, I have tried and suffered arrest and deportation in spite of the work that I accomplished at Chobe. I am aware of the possibility that I could they might just try assassinate me and things will go on as always.

Following this heartfelt outburst of repressed anger please find below an article that was copied out of Monday’s Botswana monitor newspaper. The people mentioned were apprehended in December 2009 with 6 tusks. It has taken 3 years to get the case to court and the will be able to pay a fine equivalent to $1700.00 US dollars and walk away as free men. The profit they would have made if those 6 tusks had actually been sold would be 10 times the amount of the fine.

To me it is obvious that stiffer penalties and a faster moving court system are needed in order to turn the tide. Let me repeat an earlier claim, not one single elephant poacher has been prosecuted in years in Botswana. Why? These are small potatoes. The Chinese will never get caught as they are in collusion with the top officials in the government. It is so obvious to me what the problem is.

Please FB friends, if you have cared to read this far, ask “What more can we do?” Please know that I would give my life to save one elephant and am frustrated that it seems that no one will listen? The elephants in Botswana must be saved before they are slaughtered in an upcoming event that seems to be in the planning stages. Any ideas or help will be appreciated. I have done all I that I can think to do, I have sacrificed everything I that I had to fight this battle which is widespread in Africa but at crisis levels in Botswana. What I really need is someone with some balls and political influence who can back me up so we can stop this. My fear is that the usual reaction has been to be content to be “armchair ‘conservationalists’” which is really just one step away from being simply conversationalists, which really gets nothing done.
Here then is the article, in its brief entirety, that was mentioned earlier. It really is pathetic to note that so little is being done to conserve this magnificent animal when so much is being done to kill them.

Francistown: senior magistrate Thebeetsile Mulalu fined two men convicted of illegal possession of elephant tusks p15,000 or three years in jail, should they fail to pay the money by august 30
Gosaitse Mathangwane 29, and Spencer Chikumba 41, were arraigned before court last week for illegal possession of six elephant tusks worth p89,320. The tusks weighed 63.8kg. They were caught along Gerald estates road in Francistown on December 1, 2009. In mitigation the duo told the magistrate that they are breadwinners for their families and pleaded with the court to give them a non-custodial sentence because sending them to jail would rob their families of respective sources of livelihood.

In his ruling, Mulalu said the killing of elephants for their tusks in his jurisdiction is increasing at an alarming rate. He said it was the duty of the court to impose stiffer punishment to deter others who may be tempted to illegally deal in elephant tusks. He said elephants are a partially protected species that earn the country foreign currency in the tourism industry.
Posted by Dr. Clay Wilson at 3:45 PM

In May 2013 I assisted KWS in treating this spear and arrow wounded elephant. After posting on FB we were told this elephant was killed in July. He survived in great pain for 2 1/2 months. Kenya has the best anti-poaching units in Africa one can imagine what the other countries elephant populations are suffering... 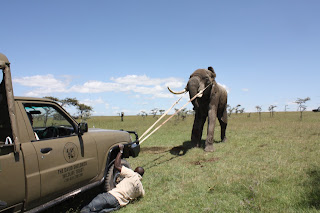 Mandelas Quote: It always seems impossible until its done

Who is this Crazy White man ? ( Masungo) 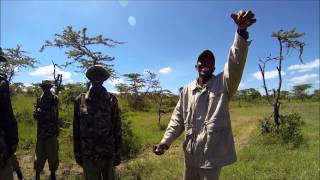 I often joke with new wardens I meet to break down barriers and to work as a team. Here I taunt them with an electronic cigarette that appears to blow smoke but there is no heat or fire.

http://www.youtube.com/watch?v=PnEcXRxziHQ&feature=youtu.be
Posted by Dr. Clay Wilson at 2:36 AM

There is hope for Africa These children touched my heart 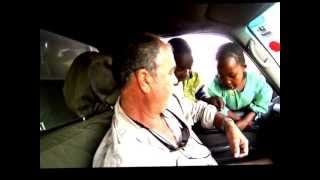 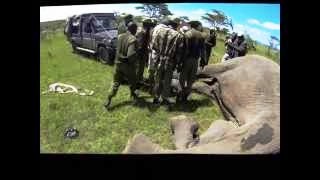 
Poachers have now taken to new strategies to kill elephants. Since KWS is so active they use poisoned spears so no gunshots will be heard.  What is most distressing is they shoot arrows into all elephant joints to slow them down so they dont run far. This is an extremely cruel and painful way to die. Kudos to KWS veterinarians for daily trying to stem the tide of suffering. This was taken in May 2013 in Kenya( if you are sensitive skip the treatments to the end where the pictures take over)

SO SAD TO REPORT CONFIRMATION THAT THIS ELEPHANT WAS KILLED BY POACHERS LAST SUNDAY JULY 14. It had suffered so much from its original treatment in May to recover and be targeted again. Along with recent deaths of KWS wardens a few days ago this is devastating to me and the country. Kenya has the best anti poaching efforts in Africa how can this still be happening????? THIS MUST STOP I HAVE NO WORDS......
Posted by Dr. Clay Wilson at 5:44 PM

Dr. Clay Wilson
United States
Dr. Clay Wilson is the Founder and Director of International Wildlife Rescue. Dr. Wilson has been a veterinarian for over 25 years.